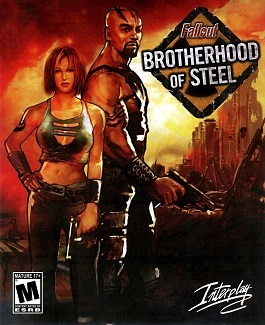 In the 1950s, we dreamed of a better world...
Advertisement:

Fallout: Brotherhood of Steel is the first Fallout game to reach the consoles. Released by Interplay Entertainment in 2004 for PS2 and Xbox, it's a large departure from the Fallout games that came before. The gameplay is a Genre Shift from Turn Based RPG to an Action RPG very much in the line of Baldur’s Gate: Dark Alliance. Also of note is its soundtrack of metalcore rather than mid-20th century classics. It has since been declared Canon Discontinuity by Bethesda Softworks.

It's 2208, and the Texas Wasteland is not an okay place to live — there's raiders, mutants, and the occasional pests who plague the wasteland. That is why the Brotherhood was supposedly cleaning house here. While hunting for mutants, raiders and tech, of course, they all go missing in the town of Carbon and you are sent to find them before they are pilfered by the Raiders. Oh, the Vault Dweller from Fallout is also here. Apparently, he took a Wrong Turn at Albuquerque and is now in the Texan Wasteland along with Rhombus, who is now white.

Of course, it didn't matter to you. You are the Initiate, one of the three new recruits to the Brotherhood of Steel, with the unenviable task of finding what happened to the Paladins who have gone missing and bring them back. All while taking out anything that opposes you.

Not to be confused with Fallout Tactics: Brotherhood of Steel, a tactical RPG developed by Micro Forte and released in 2001 exclusively for the PC.