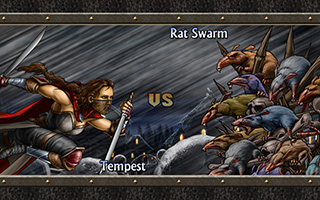 Not even the Versus Character Splash would make a mundane quest any more epic.
"Giant rats? It's like the start of every bad adventure tale my grandfather used to tell."
—Ser Gilmore, Dragon Age: Origins
Advertisement:

You're a brand new adventurer, setting out for fame and fortune, and probably about to get caught up in an epic plot to unmake reality as we know it, which only you can foil.

But first, can you clear out the rats in my basement?

A common early quest in many RPGs, particularly of the Western, tabletop-derived variety. Rats may be of unusual size, or substituted with some similarly non-threatening and easily killed critter, and indeed the basement may well be a different room entirely (possibly the Noob Cave). This may even be part of the game's combat tutorial. Whatever the specifics, there's an area filled with small squishy things that need squishing. Get to it.

Often considered a classic hallmark of the genre, and is likely to be included simply as a nod to tradition. Or, as is becoming more and more common, parodied with an unusual variety of rats.

Subtrope of Mass Monster-Slaughter Sidequest. Not to be confused with Goomba Stomp.

If you're still getting these sorts of quests when you're famous and powerful, it's high time to start hollering "Dude, Where's My Respect?"

The Rookie Duo attempt to earn some coin by taking on the pests in the sewer.

The Rookie Duo attempt to earn some coin by taking on the pests in the sewer.