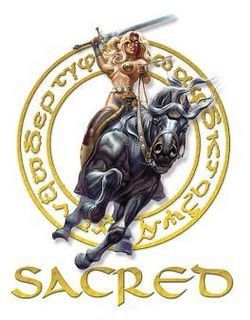 Sacred is a 2004 Hack and Slash game in the vein of Diablo. It follows a hero(ine) as (s)he goes on a quest to defeat some giant demon, destroy the necromancer Shaddar, and save the lands of Ancaria by collecting the five elements. You probably won't notice that much, as you'll be a bit busy using the spells to destroy your enemies. There are six classes in the original (Gladiator, Seraphim, Vampiress, Battle Mage, Wood Elf and Dark Elf) with two more added by an expansion pack (Dwarf and Daemon). Each class has its own special abilities learned from runes found around the game world.
Advertisement:

An expansion for the first game, Sacred Underworld was released in August 2005, and takes place shortly after the events of the main game. Both Shadarr and the Shakkara Demon have been defeated, but this victory did not come without a price. Prince Valor is dead, leaving Ancaria without a ruler. To make matters worse, a dark wizard named Anducar has rallied the demons of the Underworld (Sacred's equivalent of Hell) under his banner with the intention of invading and conquering Ancaria. With the help of Valor's lover and widow, Vilya, the heroes of Sacred must venture into the Underworld and defeat Anducar before his demonic legions destroy the world. Joining them are two new classes: the Daemoness, a female Demon who was betrayed by Anducar and now seeks vengeance, and the last of the Dwarves.

The game has a high level of customization, with the item manufacturing and skill systems allowing for many different paths for a character to explore.

A Spinoff, Sacred Citadel, was released by Deep Silver (a different developer from Asacron Entertainment, who made Sacred and Sacred 2) on April 17, 2013. It is a Beat 'em Up Sidescroller with Sacred-level of customization and loot drops. It served as a prequel for the next main game, Sacred 3, which was released by Keen Games on August 1, 2014.

The first game and Underworld provide examples of: