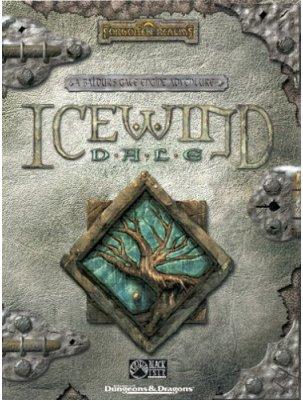 "They say that history is the greatest of all teachers. That the tales of past deeds define who we are in the present, and what we shall be in the future. It is said that such tales shall, with each telling, illuminate us all with the light of truth. I shall tell you of such a tale."
—-Narrator, Icewind Dale
Advertisement:

Icewind Dale is a pair of games set in the Forgotten Realms and made by Black Isle Studios using the Infinity Engine. As you may guess from the title, they occur primarily in the Icewind Dale region, a windy, snowing valley in an area called the Ten Towns in the Spine of the World mountain, far to the north of towns like Neverwinter and Luskan.

The first game starts off in the humble fishing village of Easthaven, where your party has Jumped at the Call of adventure to accompany the hunter Hrothgar to Kuldahar, a village settled in the soothing warmth of a gigantic oak tree that lately has been getting a bit too chilly. As you investigate the source of this, it turns out that the tree's vanishing warmth is part of a larger plot between two warring Eldritch Abominations seeking to seize control of the region. The second game picks up thirty years later and similarly starts off with the village of Targos being beset by goblin attacks, and leads into a plot about an army of monsters preparing to conquer the region.

Interestingly, Icewind Dale (and its sequel) has the player create an entire party (rather than one character), lending the games more of a dungeon crawl theme than Black Isle's previous Infinity Engine titles Baldur's Gate and Planescape: Torment. Plot is sparse, but not shoehorned in; rather, the game is written in such a way that the player can follow the plot as tightly as he desires, or ignore it entirely in favor of some quick monster-bashing.

Both games have been rereleased for current Windows operating systems on GOG.com. Beamdog Studios have released an Enhanced Edition of the first game on October 30, 2014.

"There are many roads left to travel, many deeds left to do, before the end of my days."