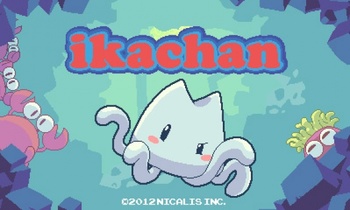 Ikachan is an exploration platformer with RPG elements made by Studio Pixel. After releasing in 2000, they would go on to create Cave Story. The game is often cited as a 'practice' by Pixel in preparation for the aforementioned Cave Story.
Advertisement:

In this game you are Ikachan, a young squid who lives in an underwater society constantly ravaged by earthquakes and facing a food shortage problem. He must explore the world, gain powerups, eat fish, and eventually face off against the tyrannical ruler Ironhead.

The game can be found here, at the bottom of the page

. It has also been released on the Nintendo 3DS eShop in 2013, a whole 13 years after the original release.

There's also an Ikachan microgame available for download for those who own WarioWare: DIY.