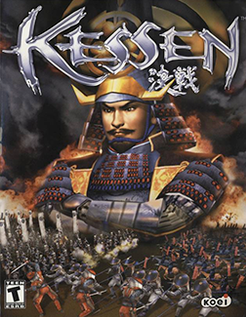 Kessen is a 2000 video game developed by Koei, and is one of the first games released for the PlayStation 2. Taking place in Feudal Japan, players live out the last days of the Sengoku Era with the rivarly between The Toyotomi and Tokugawa clans to see who would rule over Japan beginning at Sekigahara and climaxing (possibly) at Osaka Castle. Unlike the sequels Kessen II and Kessen III gameplay is very different from them. Each character has a number of troops at his disposal and can issue special attacks.
Advertisement:

The game starts out as Ieyasu Tokugawa in control of the Eastern Army, after beating it the first time the players can then play the other side in control of Mitsunari Ishida and The Western Army. Alternate routes and battles can take place depending on victories and defeats.