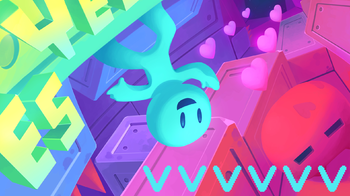 VVVVVV is an indie game created by Terry Cavanagh for PC in 2010, before porting it to many other platforms in the following years. It stars the crew of a little space ship: player character Captain Viridian, Doctor Violet, Officer Vermilion, Professor Vitellary, Doctor Victoria, and Chief Verdigris. Their ship crashes and is sent into a strange, unfamiliar dimension, and scatters Viridian's crew across the land. The Captain needs to find them and make sure that they're safe! And that's where you come in.

VVVVVV is a 2D platformer with exploration elements and, in place of a jump button, a "Flip" button to reverse your character's (personal) gravity. Mastering this is essential to finishing the game. Other than that, there are no methods of attack, power-ups, abilities, keys, locked doors, or any of that jazz — the only thing standing between you and sweet victory are the challenges put before you (and 7,612 spikes.)