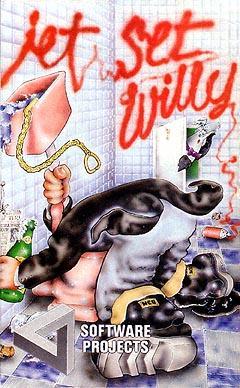 Jet Set Willy is a computer game originally released in 1984. It was released first on the ZX Spectrum, but was later released on multiple platforms. It is a sequel to Manic Miner. The plot is that Willy had bought his new house with the money from the previous game, but it is unexplored and full of what are probably the previous owner's experiments. After a celebratory party, the place is chaos and his housekeeper Maria won't let him go to bed until he sorts it out. Willy must tidy up the mansion so he can get some much needed sleep.
Advertisement:

With regard to gameplay, Jet Set Willy is one of the first multi-room (Manic Miner had single room levels) Gotta Collect Them All Platform Games. There is a sequel, Jet Set Willy 2: The Final Frontier, which is an extended version of the original (spawned as a result of porting to the Amstrad CPC and back again), with the unwinnable condition fixed.

A very faithful Java version can be played here

There is a user-made add-on for the freeware game Rocks N Diamonds called Super Jetset Wily Bros 3, the level being an experiment in platforming.

Not to be confused with Jet Set Radio, an unrelated game.