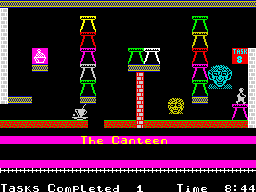 Even grabbing a cuppa in this place isn't safe.
A video game released in late 1984, for the ZX Spectrum and the Amstrad CPC, very much in the mould of (and almost certainly inspired by / owing its existence to) Jet Set Willy.

Ted is a technician at a chip fabrication plant. He must go around the plant, doing various tasks, and complete the last task before the end of the working day.

Had a sequel, "Technician Ted in Costa Capers" (usually shortened to just the last two words), in which Ted goes on holiday using the hard-earned dosh from the first game.

When the 128K Spectrum came out, this game was revamped as "Technician Ted: The Megamix", This version didn't do nearly so well as the original.