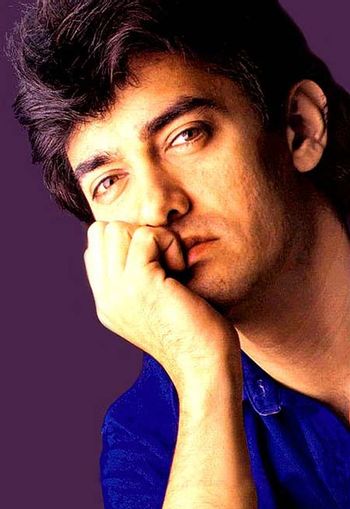 Aamir Khan (born Mohammed Aamir Hussain Khan, 14 March 1965) is an Indian film actor, director and producer. Khan worked in a number of critically and commercially successful films and has established himself as one of the leading actors of Hindi cinema. Most of his recent movies can be considered "Filmfare Bait" by most people.
Advertisement:

Starting his career as a child actor in his uncle Nasir Hussain's film Yaadon Ki Baaraat (1973), Khan began his professional career eleven years later with the film, Holi (1984). He had his first commercial success with his cousin Mansoor Khan's film Qayamat Se Qayamat Tak (1988), for which he won a Filmfare Best Male Debut Award. After seven previous nominations during the 1980s and 1990s, Khan received his first Filmfare Best Actor Award for his performance in the major grosser Raja Hindustani (1996).

In 2001, he made his debut as a film producer with the Academy Award-nominated Lagaan. Khan played the lead role in the film and earned his second Filmfare Best Actor Award for his performance. After a four-year break from acting, Khan made his comeback with Ketan Mehta's Mangal Pandey: The Rising (a 2005 film about the eponymous Sepoy whose actions helped spark the Indian rebellion of 1857), and later won a Filmfare Critics Award for Best Performance for his role in Rang De Basanti (the 2006 film about a British documentary filmmaker who is determined to make a film on Indian freedom fighters based on diary entries by her grandfather, a former officer of the British Army in India). In 2007, he made his directorial debut with Taare Zameen Par, for which he received a Filmfare Best Director Award. The success of Ghajini (2008) set the stage for the massive success of 3 Idiots (2009), Dhoom 3 (2013), PK (2014), and Dangal (2016), all of which remain among the top ten highest-grossing Bollywood films of all time.

He is known for dyeing for his art, attending rigorous bodybuilding sessions for his roles in Dangal and Ghajini.