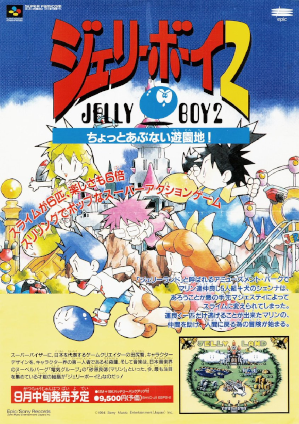 Jelly Boy 2 is an unreleased Platform Game for the Super Nintendo Entertainment System developed by Game Freak (best known for Pokémon) and a sequel to Jerry Boy (released as Smart Ball in America).
Advertisement:

Three boys, two girls and a dog were going to Jelly Land for a fun day, but a wizard appears before them and turns them all into slimes. They are then captured and held in various attractions... all except Marine, the blue slime. Now Marine has to go save his friends and defeat the wizard in hopes of restoring themselves to their original form.

Each of the six slimes have their own special ability: Marine can shoot balls at enemies, Mint tosses the star on her head like a boomerang, York can dash across the screen (he can also fall like a rock if the player jumps from a ceiling while holding the down button), Sienna's tail can be used for a slow descent, Carm can climb down certain ledges, and Ed produces balls that float in the air for a bit before going off like a bomb.