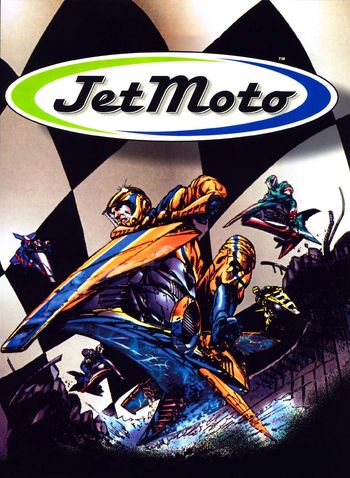 Jet Moto. Racing on the edge, and sometimes off.
—Magazine ad for Jet Moto.
Advertisement:

Jet Moto is a racing game series that was developed for the PlayStation in the late 1990s. Racers use a diverse array of hover bikes varying in mass, maneuverability, lift, and acceleration to compete against each other at high speeds over a variety of race courses that are intricately linked to their environmental settings. The complexity of successful strategies is increased by the inclusion of limited turbo boosts and magnetic poles at sharp turns to which the rider may "grapple" while turning in order to slingshot around the corner. Many of the courses themselves present a significant challenge as well, requiring racers to navigate across bottomless pits on awkwardly placed platforms, monitor speed at jumps to avoid overshooting the landing, and slip through groups of oncoming racers to get to the next checkpoint (these are called suicide tracks).

Jet Moto is notable for its overt use of product placement, simulating the wash of posters and billboards plastered all over everything at major racing competitions in real life.