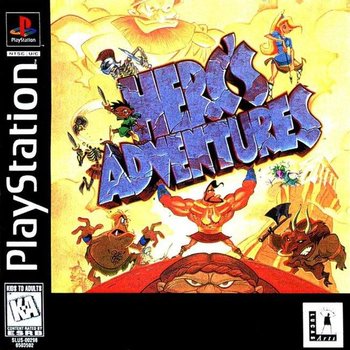 Spring is booming in Ancient Greece. Flowers, plants and all kinds of life are growing thanks to the efforts of Persephone, goddess of spring. Everything is fine and dandy until Hades, being the party pooper that he is, kidnaps her to turn Greece into a winter wasteland where eventually everybody will die so he can fill up Hell. Zeus finds himself rather short on heroes for this one since only three of his usual guys are still alive: Hercules, Jason and Atlanta.

It's up to one (or two if someone picks up the second controller) of these guys to go save Persephone, which won't be easy since their Ancient Greece is... rather weird, with sheep-eating cyclopses, laser-spewing giant boars, lasergun-toting aliens, blood-thirsty soldiers and Amazons and a variety of weapons and items plain crazy such as magic voodoo dolls, healing gyros or garbage.

In many ways, from the style of gameplay to its offbeat sense of humor, it can be considered a Spiritual Successor to Zombies Ate My Neighbors. The Martians from that game even feature prominently.