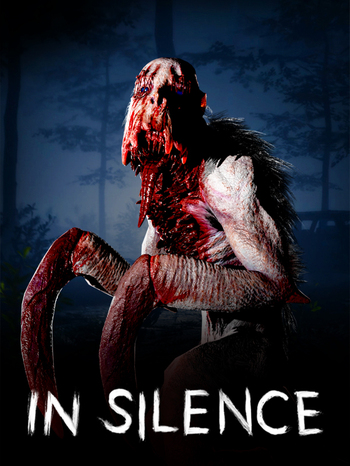 In Silence is a four-versus-one Survival Horror Video Game by Ravenhood Games.

Four unlucky souls have found themselves in the woods late at night after their car breaks down. And in these woods lurks a vicious creature called the Rake that will eat them alive if it catches them. The humans have two options: they can either try and fix their car so they can get out of the monster's territory, or they can unlock the armory to get their hands on some guns they can use to take the creature down.

They have to be careful though, because as vicious as this creature is, it has poor eyesight. To compensate, it tracks its prey by sound, so the humans will need to be as quiet as possible... this also includes the actual players, as the game (in its default settings) recognizes any sound coming from the human players' microphones/headsets and lets the monster hear it.

In Silence contains examples of: