Do you remember it? That tale about flowers?
I thought it was a good story. I thought: "It's sure to have a happy ending."
I was wrong. It's a story about pain.
Let me tell you...again... 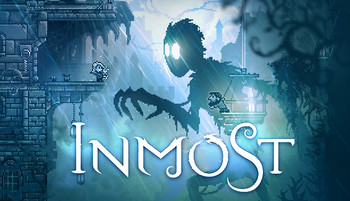 INMOST is an indie adventure game developed by Hidden Layer Games and published by Chucklefish. It was released on Steam, the Nintendo Switch, and iOS on August 21st, 2020.

The story follows three different playable characters, with the narrative switching from one viewpoint to the next at various intervals: Adam, an old man navigating the towering castle of a great and terrible witch; The Knight, a mysterious man clad in armor gathering the suffering of his quarries in exchange for great power from dark forces; and Elizabeth, an adventurous and imaginative young girl trying to make the best of an uneasy relationship with her parents. As the story progresses, the three stories slowly but surely weave together to create a deeply emotional tale about loss, love, and hope.

A trailer for the game can be viewed here

INMOST features examples of the following: