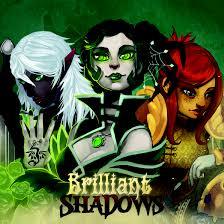 Brilliant Shadows is a visual novel that follows the story of Veronica Ashmar, a new graduate of the Mountain and a necromancer. Tradition dictates that upon graduation, necromancers and paladins are to perform the pairing ritual. Binding together one of each type of mage, entwining their lives and powers with another and sealing their fates together with a matching mark upon their primary hands.

Those that succeed and become paired go on as full mages, those that do not are considered nothing more than hedge mages. There are no exceptions and the ritual has never failed…

Until the day Ash receives a mark and no fellow graduate to match it.

Now she must discover the origin of her mark and attempt to solve the greatest magical mystery that the Mountain has ever known.

A second chapter, Pale Spectrum, was released after a successful Kickstarter. This new chapter focuses on the character of Belinda.