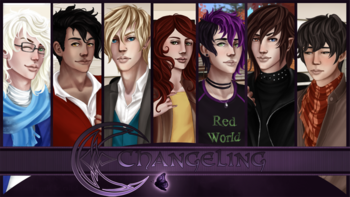 Main character Nora Lewis and her love interests. From left to right: Corvin, Danny, Marc, Nora, Elliot, Ewan, and William.
''Come away, O human child! To the waters and the wild with a faery, hand in hand, for the world’s more full of weeping than you can understand.
— W.B. Yeats
Advertisement:

Changeling is a Romance Game Visual Novel by Steamberry Studio

, released on January 30, 2019. After funding a successful Kickstarter, the game was released on both Steam and itch.io.

After years of living in a city she detests, Nora Lewis finds herself returning to Pine Hollow, the town she grew up in. While she is more than thrilled to come back to the place she treasures so much, fate seems to have plans for her. Everything she ever believed to be true is shattered by a single event and so, she is forced to confront a new reality where not everything is what it seems, and that includes herself. In this new world, Nora will embark on a journey to solve the mysteries of her past all while attempting to repair the broken relationship with her twin brother and maybe, even find love along the way...