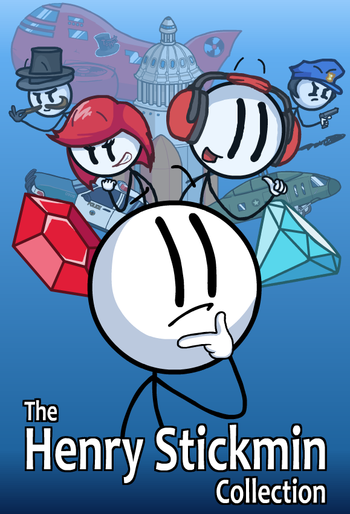 "What's the mission?" note From left to right: Reginald Copperbottom, Ellie Rose, Henry Stickmin, Charles Calvin, and Rupert Price.
"Wait, that worked?! I thought that was the stupid one! Oh well, of course it worked then."
— Jacksepticeye, providing a succinct summary of the series in general.

is a series of Web Games created by Puffballs United, featuring the titular protagonist Henry Stickmin.

The series consists of six games. In each game, the player has to help Henry succeed in an assignment. To do so, they can choose between multiple tools for Henry to use or actions to perform.

Each game is infamous for its "FAIL" system, owing to their Gamebook style. In every path there is one (and occasionally more) set(s) of choices that allow you to progress, and all deviations from it give you different hilarious failure scenes. Actually seeing each unique failure is usually considered more interesting and fun than trying to complete the game perfectly.

The sixth and final game, Completing the Mission, launched on Steam on August 7, 2020 as part of The Henry Stickmin Collection, alongside remastered versions of the previous games with improved visuals in addition of the first game receiving a remake and marked as a prologue to the whole series.

In the trope list below, please abbreviate each of the above titles as the last word of its name; Escaping the Prison, for example, should be Prison. Likewise, the routes in Mission are based off of various endings from the previous two games. Here's what to abbreviate the ending ranks from Airship and Complex to:

As an example, the term for the route from where Henry retrieved evidence for the government (rank GSPI) and escaped the Wall alone and unnoticed (rank GI) would be Government/Ghost.

Henry combines with Ellie to fight The Toppats. It doesn't go as planned.

Charles has a plan

Henry combines with Ellie to fight The Toppats. It doesn't go as planned.

Charles has a plan