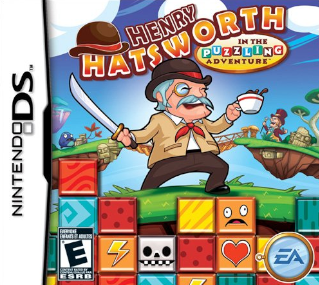 A 2009 Puzzle Platformer/Action-Adventure game developed by EA Tiburon. Otherwise known as The Most English Game In The World.

The protagonist, Henry Hatsworth, #1 member of the Pompous Adventurers' Club, is on a mission to obtain the legendary Golden Suit created by the Gentleman, who could control the Puzzle Realm with it in order to obtain that world's treasure. He discovers the first piece, the Golden Hat, resulting in the re-opening of the Puzzle Realm. With the aid of his assistant, Cole, he must travel all over the world in order to collect every piece of the suit and seal the Puzzle Realm once and for all. However, he's not the only one seeking the pieces; his Arch-Enemy, Leopold Charles Anthony Weasleby the Third, has the same goal. And he won't let Hatsworth succeed so easily...

The game brilliantly combines puzzle games (think Panel de Pon) and platformers into one. Compare Puzzle Quest, which did the same with RPGs. Has a Spiritual Successor, Monster Tale.

Has a developing Character sheet here.