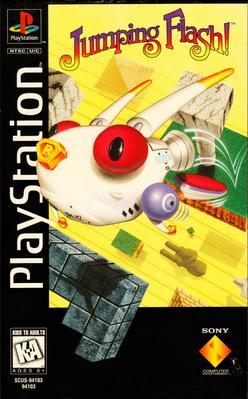 The box art for the original game
"Robbit can do the job! Let's go Robbit! JUMP AND GO!"
Advertisement:

Jumping Flash! is a series of games for the PlayStation and PocketStation. It follows the adventures of Robbit as he fights various villains with essentially the same plan: steal chunks of planets for their personal use.

Jumping Flash! is a First-Person Shooter that focuses on jumping physics. Or maybe it's a Platform Game in a first-person perspective. Either way, you control a robotic space rabbit sent by Universal City Hall to return the stolen pieces of the planet by collecting all the (carrot shaped) jetpods in each level so that they can fly back to the planet.