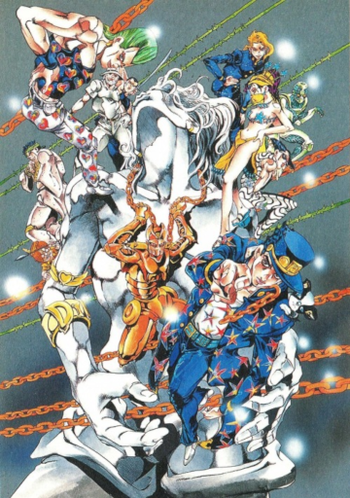 ORA! Sabaku no wa ore no Sutando da!!note ORA! My Stand will be the one to judge you!!
Advertisement:

The game plays like a typical fighting game with three buttons for attacking and the player can make their character dodge by pressing all three attack buttons.

More notably is the integration of the series' famous "Stand" ability. Each character has a "Stand" that can be summoned or activated at the touch of a button to assist them in battle and augment their abilities. Of course, characters with an "active" Stand have to watch out for their Stand Gauge, which depletes when they're hit and if emptied, will cause a Stand Crash, which will leave them vulnerable. And they still take damage if their Stand takes a hit.

Characters can also perform "Tandem" attacks with a quarter-circle-backwards Stand button input that either allows them to perform a custom combo with their stand while they also attack from the other side, or functions similar to Street Fighter Alpha's custom combo feature.

Most notable of all is the integration of the manga's story into the game. The game is based on Part 3, "Stardust Crusaders", the most popular chapter of the manga (apart from a few references to other parts of the manga) and as a result, features not just intro and ending scenes for each playable character, but pre-battle and post-battle cutscenes as well.

As it's a Capcom game, of course, different versions were made, though thankfully this game only received one update. The first version of the game, simply titled "JoJo's Venture", featured 16 characters, with 13 playable (DIO being semi-hidden), 2 hidden characters, and 3 unplayable bosses (Vanilla Ice, N'Doul, and Death 13).

The update, titled JoJo's Bizarre Adventure: Heritage For The Future in Japan and just JoJo's Bizarre Adventure everywhere else, added more characters to the roster, made the formerly unplayable sub-boss Vanilla Ice playable, as well as adding 4 more hidden characters to the 2 that were already there, making for a nicely sized cast of 22 (although 1 character remains unplayable).

The game received console ports, each with their own merits. The Playstation port had downgraded graphics due to memory constraints and seemed to be based more off of JJV in terms of interface and movesets, but had the additional JJBA characters as well as a unique "Super Story Mode" that adapted the entirety of Part 3. The Dreamcast version was arcade perfect to the point it had both JJV and JJBA on the same disc, but lacked a Super Story Mode.

Around 2011, the existence of a "HD" rerelease on PlayStation 3 and Xbox 360 for their respective download services was leaked in an XBLA list. The game was eventually officially announced at the 2012 San Diego Comic Con and then released in the summer of that year to commemorate the 25th anniversary of the JoJo manga. The new release features leaderboards and achievements as well as new graphical filters and, for overseas versions, the first time players could officially restore the more violent elements.

, due to the video game rights to the JoJo franchise transferring from Capcom to Bandai Namco.