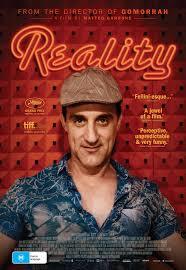 Reality is a 2012 Italian film directed by Matteo Garrone. It follows the story of a fishmonger named Luciano, a man who wants nothing more than to be on Big Brother. After he auditions, he believes that the judges love him and that he will most definitely be on the upcoming season, so he alters his lifestyle as if he is already being judged. For Luciano, the lines between reality and Reality TV have become blurred, much to the dismay of his family and friends.

The film won the Grand Prix in the Cannes Film Festival in 2012 and garnered a lot of interest due to the casting of Aniello Arena, who was serving a life sentence in prison during the filming.