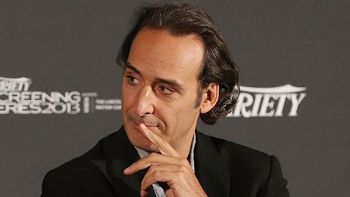 "I listen with my eyes and I look with my ears."
Advertisement:

He began composing in the late 80's in his home country and gained international recognition in 2006 with his scores in The Queen - for which he was nominated for an Academy Award - and The Painted Veil. These days he is the Associated Composer for directors Roman Polański, Jacques Audiard, George Clooney, Guillermo del Toro, Stephen Frears and Wes Anderson. He’s also a collaborator with writer/director Chris Weitz.

Desplat is known for having a pretty extensive curriculum, with more than 4 scores every year, and has touched every possible genre like political thrillers (Argo, Zero Dark Thirty, Syriana), fantasy films (The Twilight Saga: New Moon, The Golden Compass, Harry Potter and the Deathly Hallows, Godzilla (2014)), action films (Firewall, Hostage), animation (sorry to say this, Brad Bird) (Rise of the Guardians, Fantastic Mr. Fox), comedies (Julie & Julia, Wes Anderson films), periodical dramas (The Painted Veil, The King's Speech, Lust, Caution, The Imitation Game) and even TV spots (the Jaguar spot featuring Tom Hiddleston, Ben Kingsley and Mark Strong). Though he works more often in the USA he still composes for his home country, like Rust and Bone and A Prophet.

He has been nominated for 8 Academy Awards, and won two, for The Grand Budapest Hotel and The Shape of Water.

Films with soundtracks by Alexandre Desplat:

Rest of his filmography: