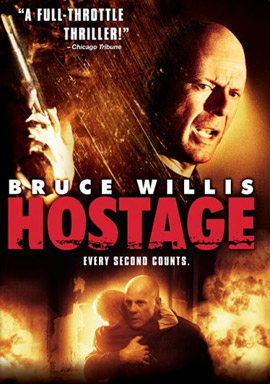 Hostage is a 2005 thriller film directed by Florent Emilio Siri and starring Bruce Willis. It is based on the novel of the same name by Robert Crais, to which it is relatively faithful.

The film opens with ex-SWAT officer turned Los Angeles hostage negotiator Jeff Talley (Willis) attempting to defuse a situation where a man is holding his wife and son hostage due to the wife cheating on him. Alas, he doesn't act quick enough, and the man shoots the two before shooting himself. The son dies in Jeff's arms. This leaves Jeff unable to endure hostage situations anymore, so he moves with his wife and daughter to the (fictional) peaceful suburban hamlet of Bristo Camino in Ventura County and becomes a police chief.

One year later, by which time Jeff's marriage is disintegrating, two teenagers, Dennis (Jonathan Tucker) and his brother Kevin (Marshall Allan), as well as their mysterious accomplice Marshall "Mars" Krupcheck (Ben Foster), take the wealthy Walter Smith (Kevin Pollak) and his two children hostage in their mansion after a failed robbery attempt. Jeff participates in the subsequent police standoff initially, but eventually backs out due to his painful memories. Unfortunately, it turns out that Walter has been laundering money for a mysterious criminal syndicate through offshore shell corporations. He was preparing to turn over a batch of important encrypted files (recorded on a DVD) when he was taken hostage. To protect such incriminating evidence from discovery, the syndicate orders one of their representatives who is known only as the Watchman (Kim Coates) to kidnap Talley's wife and daughter, and force him to return to the scene to call the police off. Jeff is thus torn between the Smith family and his own... what's a cop to do?