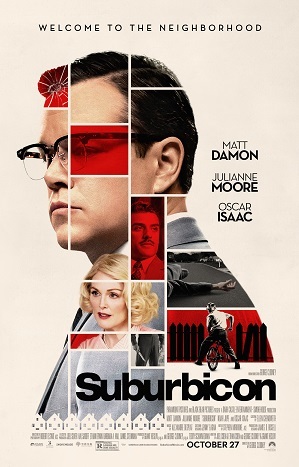 The movie tells the story of an all-white neighborhood of Suburbicon in 1959. While the town is dealing with the racial tensions unleashed by the arrival of the Mayers, the first African American family to move into town, the drama of the Lodge family unfolds in the house around the block and opposite the Mayers’. Two robbers break into the Lodge home, tie the entire family up and kill the matriarch, Rose (Moore), with an overdose of chloroform.

Rose’s twin sister, Margaret (Moore), moves in to help take care of Nicky, the child of the family. Soon after her arrival, she begins to transform herself into Rose, dyeing her hair and having sex with Gardner (Damon, Rose’s widowed husband). As the movie progresses, it becomes clear that there is more to Rose's death than meets the eye, and Nicky finds himself in ever increasing peril, all the while a race riot continues to brew in their back yard.