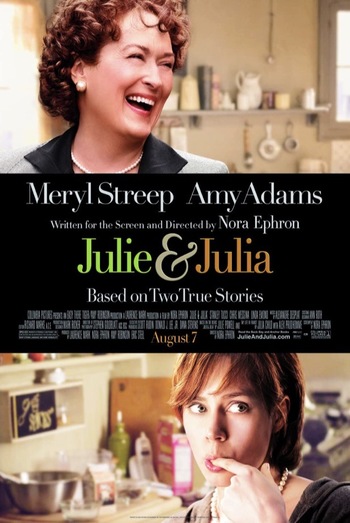 Julie & Julia is a 2009 comedy-drama film written and directed by Nora Ephron, based on a 2006 memoir of the same name by Julie Powell. It tells two stories that, while related, never quite intersect.

One story is about Julie Powell (played by Amy Adams). Julie is a government worker and unsuccessful writer who has just moved from Brooklyn to a depressing part of Queens for a larger apartment (relatively speaking) and to be closer to her husband's place of work. Her work is depressing — the year is 2002, and she is dealing with a lot of calls related to the 9/11 attacks. When Julie learns that one of her friends, who she considers vapid, is writing a blog, she decides to write one herself. She and her husband discuss what it should be about, because it is supposed to be a distraction from her depressing life. They finally decide it should be about cooking. She has a copy of Julia Child's cookbook Mastering the Art of French Cooking and so she decides to cook every recipe in it in one year (please note that there are over five hundred recipes included in it). This, even though she has a husband, a job, and a cat, and is only home in the late evening, quickly becomes an obsession.

The other story is about Julia Child herself (played by the great Meryl Streep) and how she came to (help) write that cookbook and become a great cook. We meet her in the beginning of the film in the late 1940s, when she moves to Paris. She is the life of the party, so exuberant that most people love her despite her impropriety, which is good because she is married to a diplomat. Since the wives of diplomats are rarely required to do anything, Julia knows she needs to do something to keep from going crazy. After unsuccessful (as in unenjoyable) attempts at hatmaking and learning to play bridge, she decides to take a cooking class at Le Cordon Bleu. On determining that she already knows what the cooking course is attempting to teach her, she asks the woman running the place (one of the few people who dislike her, and the feeling becomes mutual) if there is anything more advanced. There is—the course for professional chefs. So Julia takes that one and loves it...