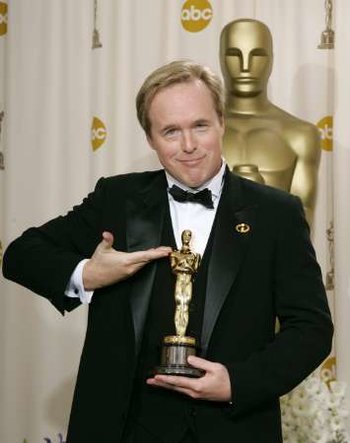 To us as we are to amoebas.
"It’s not a genre! A Western is a genre! Animation is an art form, and it can do any genre. You know, it can do a detective film, a cowboy film, a horror film, an R-rated film or a kids’ fairy tale. But it doesn’t do one thing. And, next time I hear, ‘What’s it like working in the animation genre?’ I’m going to punch that person!”
— Brad Bird on the DVD commentary of The Incredibles
Advertisement:

Phillip Bradley "Brad" Bird (born September 24, 1957) is a director and screenwriter from Kalispell, Montana. His experience lies mostly within the realm of animation, and he's also known as one of the directors to actually bob and weave his way around the concept of the Animation Age Ghetto, due to most of his works looking aesthetically cartoony, but having a maturity and depth that rivals most live-action pieces.

Bird got his start working as an animator on Animalympics, Disney's The Fox and the Hound and Martin Rosen's The Plague Dogs, and moved on to work with Steven Spielberg in his Amazing Stories anthology series, notably with a short titled "Family Dog" (which later got turned into a TV series). He got his big break after he managed to grab the attention of Tracey Ullman, and began work alongside Matt Groening on a crude animated series that premiered on The Tracey Ullman Show, called The Simpsons.

Bird's later claims to fame include two films that captured his love of the classic comic book stories, The Iron Giant and The Incredibles, the latter of which was the beginning of his tenure at Pixar. His next animated film was the Pixar-produced Ratatouille. He then moved into live-action by directing Mission: Impossible – Ghost Protocol, the fourth installment of the Mission: Impossible films, which is his live-action debut. The film has received extremely positive reviews, particularly for its action scenes. His most recent live-action project is Tomorrowland, a film for Disney inspired by the area of the Disney Theme Parks, and in 2018 he directed the long-awaited Incredibles 2.

Tropes demonstrated by Brad Bird and his works include: