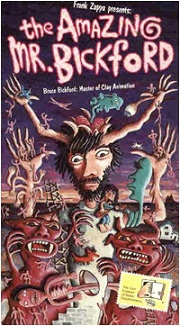 Bruce Bickford (born February 11, 1947 in Seattle, WA) is an American Artist and Animator who specializes in Deranged Stop Motion animation with clay. He is best known for his work with Frank Zappa, contributing to his 1979 movie Baby Snakes and his home video releases The Dub Room Special and Video From Hell. They collaborated on the home video The Amazing Mr. Bickford, which featured Bickford's creations set to Zappa's music.

While his work might inspire What Do You Mean, It Wasn't Made on Drugs? reactions, his work is actually an aversion, since Zappa wouldn't have worked with him if it was. There's also the fact that the incredible precision required with Claymation means that it couldn't have been made on drugs.