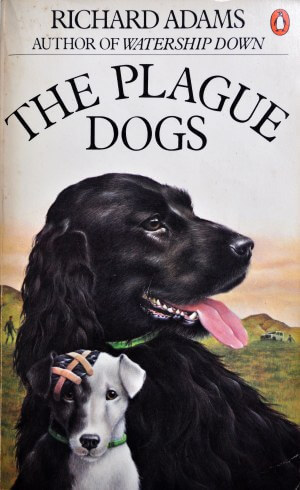 A 1977 novel by Richard Adams about two dogs named Rowf and Snitter. The two narrowly escape from an animal testing lab and roam the English countryside with the help of a fox known only as "the tod" (a dialect word for "fox"). The facility, Animal Research, Scientific and Experimental, attempts to reclaim the dogs and spreads a rumour that the two harbour a dangerous bioweapon to assist in their capture, hence the title. It was made into an animated feature-length film in 1982, a few years after Adams' other book, Watership Down.

Known for being Darker and Grittier than the previous work, it is set in the gray and wintry fells of England's Lake District. The animated adaptation is an infamous Tear Jerker as well (to the point that many call it "a British version of Grave of the Fireflies with dogs"); the original print of the film was censored for wide release and is considered rare.

Emphasis is made of Rowf's Woobie status as an animal subjected to repeated drowning experiments, and Snitter's role as a Doom Magnet is emphasized in at least one scene of death and serious injury that is probably the emotional nadir of the story.

The Film Adaptation provides examples of