Western Animation / Pluto and the Armadillo 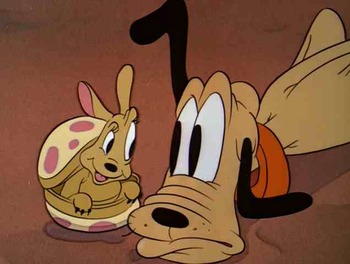 Initially, these two don't see eye-to-eye, but eventually they wind up having a ball.
Advertisement:

Pluto and the Armadillo is a 1943 animated short film from Disney starring Pluto the Pup. It was initially going to be a part of the film Saludos Amigos, but was not finished in time for the film's theatrical release.

The short has Mickey Mouse and Pluto visiting South America. While there, Mickey and Pluto play fetch with a rubber ball. Mickey throws the ball into the jungle, and Pluto chases after it. In the jungle, the ball hits a female armadillo who quickly rolls herself up into a ball - and coincidentally, while in her ball form, the armadillo just so happens to look exactly like Pluto's ball. As a result, Pluto initially thinks that the armadillo is his ball, and then when he finally finds his actual ball, he becomes confused. Eventually the armadillo unfurls and reveals that she is in fact an armadillo to Pluto. The armadillo immediately takes a liking to Pluto, but Pluto is initially suspicious of it.