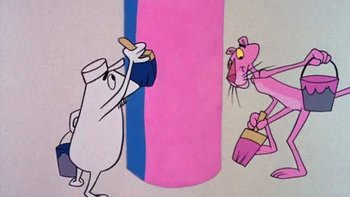 The Pink Phink (1964) is an animated short film directed by Friz Freleng and produced by De Patie Freleng Enterprises. It was the first cartoon in the long-running Pink Panther animated series, and the debut cartoon for DePatie-Freleng.

The Pink Panther wanders into a house where the Little Man (a short, mustachioed fellow) is working as a house painter, painting the house blue. The Panther takes exception to this, first bothering the Little Man, and then undoing the Little Man's work by painting over all his blue with pink. A paint war ensues.

Winner of the Academy Award for Best Animated Short Film. In addition to being Freleng's only Oscar win in his lifetime, it was the first Oscar-winning debut short from an upstart cartoon studio, a feat that hasn't been accomplished since.