Video Game / Jill of the Jungle 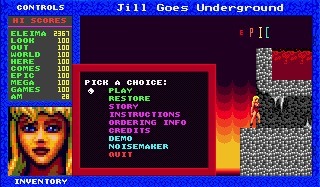 The face of our heroine.
Jill of the Jungle, released in 1992, was one of Epic Megagames' early games for MS-DOS. A side-scrolling platformer, the game consisted of three episodes: "Jill of the Jungle" (shareware), "Jill Goes Underground" and "Jill Saves the Prince" (Registered version only). The game's tagline was "No more 'save the princess' games!". The game had VGA graphics and Soundblaster support for effects and FM synthesis music. While nearly forgotten today, the success of the game gave Epic Megagames the money to develop the Unreal engine that would become the basis of so many modern video games. A sequel was planned, but Epic Megagames didn't like its overall quality, and scrapped in favor of Jazz Jackrabbit. It was however rescued by Six Pound Sledge Studios and released in the form a spiritual successor as Vinyl Goddess from Mars.
Advertisement:

In November 2018, the entire series was released for free on GOG.com. You can get it here