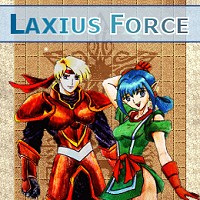 Random Hero and his Chick
Advertisement:

Laxius Power/Laxius Force is a series of RPGs created by French programmer Indinera Falls, using the RPG Maker series of tools. The story follows young ace Random Pendragon, who has dreams of becoming a knight; his lover, Sarah Brandolino; their friends, Luciana Vincenti (or Luci) and Coryool Tallemuyr; and Team Pets Herasia (a white cat) and Guanidia (supposedly a winged chameleon). During their adventures, they would discover they are no ordinary mortals, but rare inheritants of the elusive "Laxius Power", and that the fate of the world falls squarely on their shoulders.

Gameplay is similar to the Dragon Quest series. While the graphics are not exactly dazzling, the games boast huge gameworlds with lots of secrets; they are quite possibly the largest games ever produced with RPG Maker. The first three titles (the "Laxius Power" games) are free, while the subsequent ones are available as shareware.

Seven titles have been released:

Author Indinera Falls no longer maintains a personal website, but the freeware power games can be downloaded here

. The shareware Force games are available for purchase here