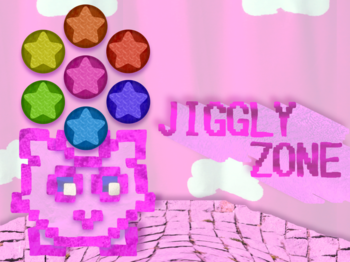 "Medallion of JIGGLER crashed into Shards
To Gather them all will be Very hards
Search far and Wide across The Lands
Return With the medals in your Hands"
- The first NPC you will come across when starting a new game. (Yes, the text is exactly as written.)
Advertisement:

JIGGLY ZONE is a video game created by sylvie (of cat planet fame) and Hubol (the maker of Craz'd! and 2).

You are a Jigglypuff named JIGGLER who is tasked with finding the 42 shards making up seven medallions scattered across the world. To do so, you will need to traverse the various lands, braving obstacles and precision platforming in the process. Fortunately, you are given the ability to drop checkpoints whenever you please.

You can play it online here

. A downloadable version of the game and its OST are also available on Glorious Trainwrecks

You have become the Ultimate JIGGLER

The birth of a new Universe

The Death of All that Exists