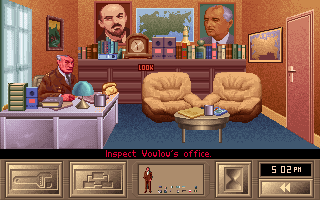 In Soviet Russia, game plays you.
Set during the dying throes of the Soviet Union, KGB puts you in the unenviable shoes of Captain Maksim Rukov, recently transferred to Department P from GRU, whose job is to ferret out corruption. (Good luck.) Your first case is to investigate the petty murder of a private eye; naturally, there's more to it than that, and you become further entangled in a conspiracy involving the CIA, mind-control experiments, and a possible military coup.
Advertisement:

Adventure games are notorious for their instant deaths and dead-ends, but none are quite so merciless as KGB. The murder mystery is actually a MacGuffin: The real goal of the game is to survive the Red Bureaucracy. Don't mess up and get reassigned to a desk job, don't get killed, don't get beaten up, don't get sent to a gulag, don't get beaten up and sent to a gulag, don’t get beaten up and killed, etc. Your investigation is being closely monitored, and at various points you're quizzed on what you've discovered. Answer incorrectly... well, you can probably guess what happens there, too. Make no mistake, you'll lose and lose and lose, eventually falling into the habit of lying to everybody, all the time—except on occasion where lying will get you killed or sent to a gulag.

Less a game than a social experiment, KGB ingeniously evokes the paranoia inside a repressive regime, where an off-color joke can buy you a trip to Siberia.

KGB was ported to CD with some rather odd additions. Rather than adding voices or redbook music, they instead cast Donald Sutherland, dressed him up as a Russkie, and inserted him as the FMV ghost of your father. They even changed the title to Conspiяacy: Starring Donald Sutherland.