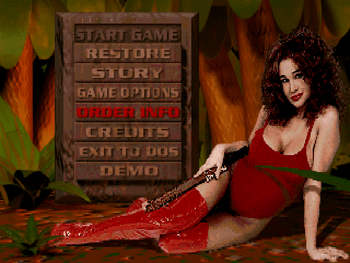 Vinyl Goddess from Mars is an oft-forgotten MS-DOS platformer released in 1995. Originally planned as a sequel to Epic Mega Games' Jill of the Jungle at one point during development, Epic was not pleased with the quality of the game and opted to publish Jazz Jackrabbit at the time instead. The game was then picked by Six Pound Sledge Studios with some changes here and there, and published by Union Logic Software Publishing, Inc..

Set in the year 200 Billion, the plot follows our scantily-clad heroine, Vinyl, on her way to an intergalactic B-Movie convention when a sudden meteor shower throws her ship off course. Vinyl ends up crash lands into a strange planet, where you must help the lovely goddess find her belongings before it's too late to reach the convention in time. The game is split into three episodes, with the first episode being released as shareware, where the goddess wanders around in exotic locations and fights against off very odd enemies.