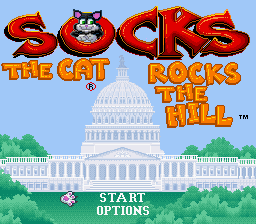 The game starts with a portable missile launch unit being stolen from the White House. The player plays as Socks to take on various enemies across multiple side-scrolling levels.

Developed by Realtime Associates and set to be published by Kemco, Socks the Cat Rocks The Hill was canceled prior to its planned release in Fall 1994. Review copies were known to exist, though none have made it into public hands. The game was considered lost for years until a prototype copy was eventually found. After years of various people refusing to release the prototype, it was released on cartridge via Kickstarter after the coding was cleaned up.