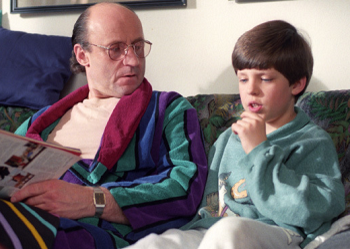 Tata, a Marcin powiedział... (Dad, Martin said...) is a Polish TV series from the 90s. Each episode consists of a dialogue between a father (Piotr Fronczewski) and his growing son (Mikołaj Radwan), starting with the phrase "Dad, Martin said that his dad said..." which leads to a discussion on some issue.
Advertisement:

The series had proven to be an immense hit, unsuprisingly mostly among parents rather than the children (despite being addressed to the kids), as they found it easy to relate to a father trying to explain in the best possible way all the complicated matters of the adult world to his son. A lot of the humour comes from the young boy's naivety and innocence, as well as the father's impulsive character and how often he ends up caught off-guard by the boy's wisdom.