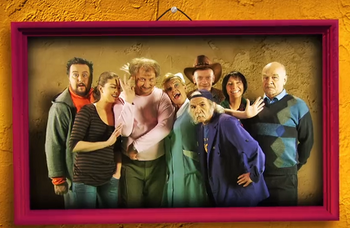 Świat Według Kiepskich (The World According to Kiepskis) is a Polish sitcom first shown in 1999 and still ongoing. It started out as the Polish version of Married... with Children, which was known in Poland as Świat Według Bundych... but it eventually became its own Denser and Wackier thing.

The series focuses on the residents of the fictional townhouse at ul. Ćwiartkinote literally Quarter Str. 3/4 in Wrocław. The head of the titular family, Ferdynand "Ferdek" Kiepski, is an unemployed Lazy Bum with an occasional get-rich-quick Zany Scheme. His wife, Halinka, is a hard-working nurse note actually, she started out as a cleaning lady, but Ferdek succesfully used his genie wish to improve her job - it's that kind of a show, exasperated with her husband's laziness. Their son, Waldemar "Cycu" Kiepski is a dumb jock, and their boy-crazed daughter Mariolka rarely listen to them. Joining the cast were Ferdynand's mother-in-law, Rozalia, and a drop-in mailman Edzio. Ferdynand's main rival and frenemy is a small-time shady businessman Marian Paździoch, and the dim-witted Arnold Boczek serves as a third stooge.

The plots flip-flop between relatively down to earth and flights of fantasy - done on a budget, which is part of the charm.

Reccuring tropes in the sitcom: