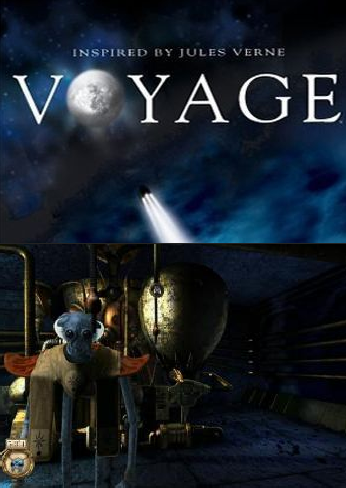 The cover, and one of the Selenites.
Voyage: Inspired by Jules Verne, is a Point-and-Click adventure game based on the Jules Verne books From the Earth to the Moon, Around The Moon, and Around the World in 80 Days.
Advertisement:

In the game, you play as Michel Ardan, one of three people who've taken off in a spaceship on a trip to the moon. On the way there, Michel passes out, and when he comes to, the others are dead, and he seems to be in a bit of a pickle with his oxygen supply quickly trickling down to nothing. From there, Michel must...

a)Solve the mystery of his traveling partners' murders.

b)Make more oxygen for himself.

c)Make sure his shuttle reaches the moon in a manner that won't end with him dying in a crash landing.

Should he survive, Michel finds himself on the moon, and discover an unbelievably vibrant ecosystem there, with a wide variety of flora. He also discovers the Selenites, who don't seem to take kindly to his presence there.

The game was developed by Kheops Studio and published by The Adventure Company. It was released on March the 3rd, 2006.