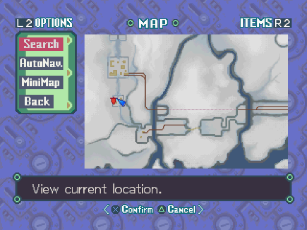 An in-game display of a miniature version of the entire level. The game has to be one where your normal field of view is limited to the area around a player character. Therefore, Real-Time Strategy games and such doesn't count.

Examples generally fit into one of two types:

Systems that display a map of where the player has already traveled are often said to be utilizing "automap". The term descending from early role-playing games where the player was often expected to create their own map, typically on graph paper.

The map display would also rotate to indicate the direction the player is facing, either by rotating the 'you are here' cursor arrow, or by rotating the entire map so that up is the direction they are going. Generally the former method is more commonly used in older games as it was much easier with limited processing power to rotate an arrow than it is to rotate the entire map.

May also be a Enemy-Detecting Radar, if it shows enemies.