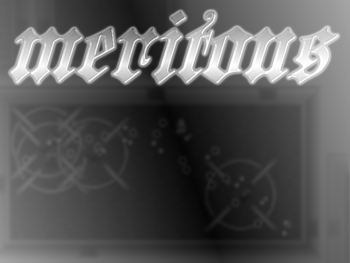 is an independently-made PC game, a cross between a top-view dungeon crawler and a bullet-hell shoot-em-up. In it, you control main character Merit, who travels through an enormous 3000-room labyrinth, the Orcus Dome, in order to find three artifacts called the PSI Keys, and restore them to their proper locations.

Although enemies fire copious amounts of bullets at you, you don't shoot back- instead, you have an attack called a PSI Circuit, which you charge up to unleash a shockwave that hits enemies and nullifies their shots. As you charge up the PSI Circuit, target reticules appear on nearby enemies, the circle indicating they're in range, and the cross indicating you've charged up enough to damage or kill them. You can't just use the PSI Circuit as often as you want, though. After releasing it, there's a cooldown time before you can charge up again, and the longer you charge up, the longer you have to wait. Destroyed enemies leave behind PSI crystals you can use to upgrade three facets of your PSI Circuit- Circuit Charge (charge up faster), Circuit Refill (less cooldown time), and Reflect Shields. When you have at least one level in Shields, a barrier is projected around Merit, which will deflect one bullet per shield level, before having to regenerate. As you upgrade Shields, the barrier becomes bigger, then shows multiple layers as it gets stronger.