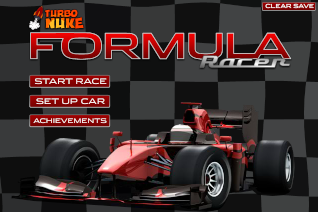 Formula Racer is an Adobe Flash video game by Turbo Nuke released in 2011. It's a Racing Game in which you race other people in Formula 1 cars. While you're racing, a boost meter builds up and can be released for a boost of speed. This is one of the few games utilising Flash that is 3D.

The game has a sequel titled Formula Racer 2012, released in... well, 2012. It has some graphical improvements, three classes of vehicles, twelve new tracks, and a slightly changed upgrade system.