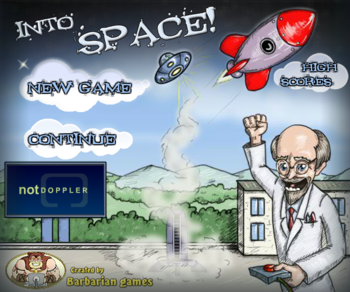 Into Space is a series of Adobe Flash video games by Barbarian Games. The first game was released in 2010 and has you play as a scientist whose rocket must fly to the Moon. There are several upgrades and in-game achievements.

Into Space 2 was released in 2012. It takes the formula of the first game and expands on it with the new goal of reaching Mars, more rocket parts, upgrades, and 30 missions to clear with each one having a different objective.

Into Space 3: Xmas Story was released in 2013. It's pretty much the same game as the predecessor, only it has a Christmas theme and the goal is collecting 1000 gifts which were stolen by aliens to save Christmas. There are some minor improvements and a revamped mission system where you get a random mission every time instead of picking one as a separate level.