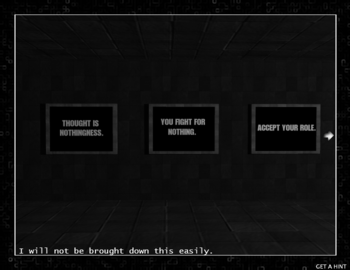 The great madness is coming. The infinite ocean will rise.
Advertisement:

The Infinite Ocean is a point-and-click flash game by Jonas Kyratzes, the co-writer of The Talos Principle. The game is done in escape room style and you have to browse through various monocromactic rooms interacting with both objects on the scenario and computer terminals. Each terminal has several entries with text telling the plot of the game. Players also need to scan several terminal entries searching for passwords, which can be used to unlock other terminals.

, comprehensively reading all text in the game can take up to two hours.

Currently, the only known way to play it is using the Newgrounds Player [2]

The game is intended by its creator to be played blindly.[3]