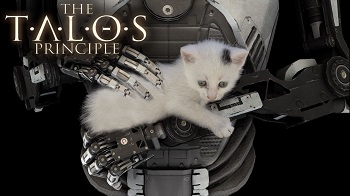 The Talos Principle is a first-person puzzle game by Croteam, developers of the Serious Sam games. In it, you are a robot exploring a series of ancient ruins, solving puzzles in order to collect the tetrominoes (referred to as sigils in-game) needed to unlock subsequent levels. This is interspersed with a disembodied voice calling itself Elohim that claims to be the creator/maintainer of the world (and you) while speaking remarks of an overtly religious bent, and a librarian program criticizing what Elohim says and arguing philosophy with you.

A DLC expansion, Road To Gehenna, was released on July 23, 2015. The player takes the role of Elohim's messenger, Uriel, on a quest through a hidden part of the simulation. His mission is to free the entities which have been imprisoned there.

The game was released for the PS4 on 13 October 2015, bundled together with the DLC. In May 2016 Croteam announced that a sequel is in the works.

The Talos Principle provides examples of the following tropes: