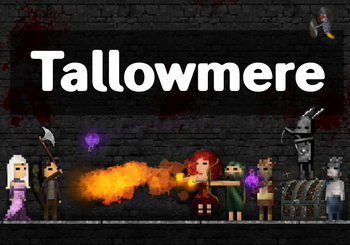 Tallowmere is a 2-D Side View Roguelike in which you try to get as far in a randomly-generated dungeon as you can. Why? Uh, because it's there, and Lady Tallowmere wants you to kill as many monsters as possible.
Advertisement:

It was developed by Chris McFarland, and released on PC, Mac and Linux on 3rd March, 2015 via Steam and Itch.io