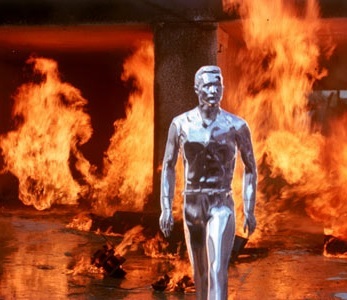 This walking blob of mercury made us believe it would kill us in a heartbeat.
Admit it: When the White House got blown up and the Empire State Building got incinerated, you wanted to turn on the news and make sure that they were still there.
Advertisement:

When that first T-Rex roared you had to fight the urge to run out of the chair.

You spent years wondering where the casting department found those talking trees.

...and just what the hell kind of stuntwoman could really make her head turn a full 360 degrees.

You see the Big G marches on the screen with his pals, the earth trembles.

and when that giant ape comes, your spine tingles.

You really did believe a man could fly,

and shouted "Hallelujah!" as the cliffs floated by.

When the thing revealed itself, you screamed "WHAT THE FUCK?!"

and then when that Star Destroyer flew overhead, you wanted to duck.

This is the work of Visual Effects artists. Some should be called Visual Effects Geniuses. For some reason, most of them are called employees of Industrial Light & Magic or the Weta Workshop, but that's another story....

The unique properties of film and video allow people to contrive images of things that aren't actually there, or aren't actually happening. Some are things that are impossible, like say, liquid metal that can mimic people and objects. Others happened at a time long ago, like ancient Roman battles. Others can and do happen all the time, but are too difficult to actually film, like a train derailment for instance.

The advent of computer technology has allowed film and television to reach a point where it seems ANYthing that can be imagined can be filmed. Surprisingly though, visual effects go back to the very beginning of filmed work. Some of the methods used are surprisingly low-tech, they include animation, double exposure of film, models and stop-motion. Some are so effective, they are used even today.

There are plenty examples of bad attempts. These are the awesome moments; the visual effects achievements that have set the standard and helped sell tons of tickets.

When this standard applies to everything, from historical accuracy and technical competence, you might start seeing a case of Development Heaven.