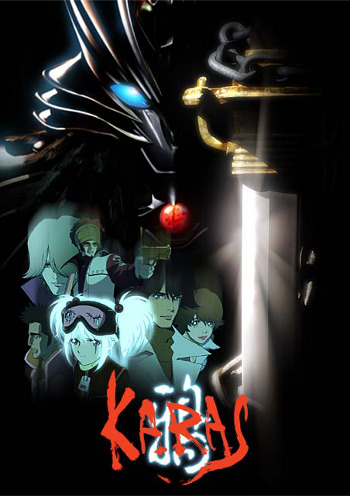 Karas is a series of six OVAs by Tatsunoko Production, later released as a two-DVD set entitled Karas: The Prophecy and Karas: The Revelation. It was originally produced to commemorate Tatsunoko's fortieth anniversary.

The plot is centered around Otoha, the new Karas of Shinjuku, Tokyo. Each city has a single Karas, humans empowered by a contract with the "Will of the City" to protect it. Oh, and each can transform into a sword-wielding knight, a jetplane, or a car-tank.

What makes Shinjuku more interesting is that its previous Karas, Eko, has decided that the city has been corrupted by humans, and intends to "cleanse" them from the land. To that end, he has created mikura, demons bonded to machines. Most of the first half of the series involves Otoha tracking down and destroying these mikura, leading up to the final battle against Eko for the future of the city.

Supporting characters include Nue, a dual-pistol wielding nue who has his own beef with the mikura, Kure Narumi and Minoru Sagisaka, two human police officers in the newly-created demon hunting division, and Hinaru, a ditzy job seeker who survived of a water-goblin (mikura) attack.

Backed up by the near-constant presence of a soundtrack performed mainly by the Prague Symphony orchestra, infused at points with techno beats, the OVA series works to deliver emotionally as well as visually. According to the Other Wiki, reception was somewhat mixed based on the main characters being "underdeveloped". The first two episodes focused mainly on presentation and action, which is a long time to wait for the actual plot in a six episode series. Beautiful and spectacular as the presentation may be.