Literature / The Spider and the Fly 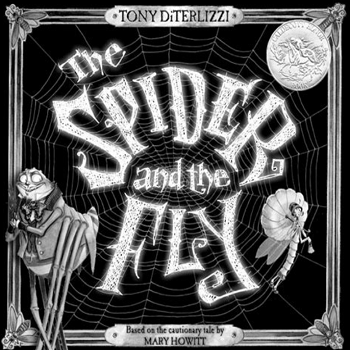 "Will you walk into my parlor?"
—The Spider
Advertisement:

"The Spider and the Fly" is a poem written in 1829 by Mary Howitt, and also featured in her book Sketches of Natural History (1834). It was more recently adapted into picture book form by Tony Diterlizzi in 2002.

In this story, the protagonist, the Fly, walks into the Spider's parlor one night. She is then warmed up by the Spider with his acts of courtesy and flattery. Unfortunately, these kind acts are a facade, as the Spider has nasty plans for her. However, even though other victims try to pass on warnings, the Fly is distracted by the Spider's charm, and therefore is unaware of the fate she is soon to befall.

Not to be confused with the epic poem of identical name by John Heywood, which dates way back to 1556.